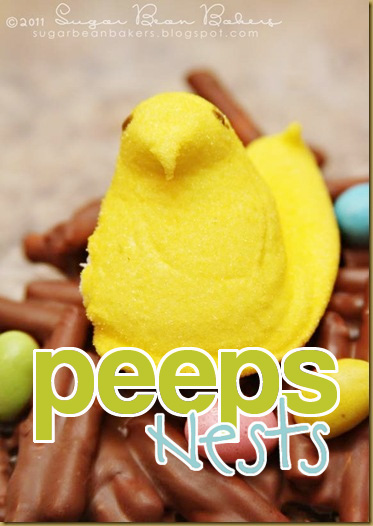 Hey! Tomorrow is Easter!!!
I’m betting this slipped your minds.
I mean, it’s not like the stores have chocolate coated, pastel aisles or anything.
Remember when there were chocolate bunnies, Reese’s Peanut Butter Eggs, Cadbury Eggs, and Jelly Beans?
A small section of one aisle contained the above plus some Easter Baskets and some of that creepy green grass. (You know it’s creepy- and my cat likes to eat it. He’s creepy too).
Holy Consumerism, Easter Bunny! Now there are about 4 aisles chock full of stuff that no kid needs, but every kid wants!

I will admit, I do enjoy trolling the Holiday sections at the store. I’m usually looking for candy and items good for baking.
Shocking, I know right?

Anyway.. it is far, far too wet around here to have a Easter Egg Hunt. We’ve had a deluge of rain in the past weeks.
And of course, the ones hunting the eggs would also be far to old to do so (17, 15, and 14), with the exception of my 8 year old nephew, that is. But don’t tell them that. They like to hunt eggs.
Who can blame them? It’s good, clean fun. And always entertaining when we find that last egg, smashed, melted, and moldy in our yard in mid-July.
You know you find them too, don’t judge!
In the attempt to pull said teens away from the video gaming console, I’m having them spend 5 minutes making these.

I've seen the same made many times with chow mien noodles, but I choose pretzels.
Cause they taste better with chocolate. You know they do.
Chocolate Bird’s Nests.
Here's what you'll need:
a bag of thin pretzel sticks
melting chocolate (chocolate chips should work too!)
jelly beans
and, of course, Peeps. 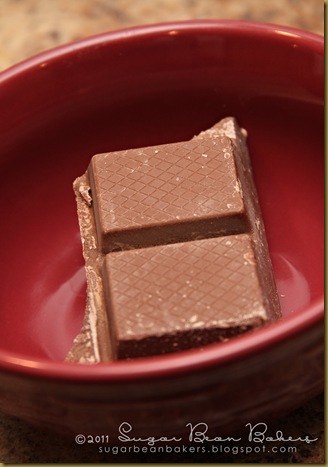 Melt chocolate according to package instructions 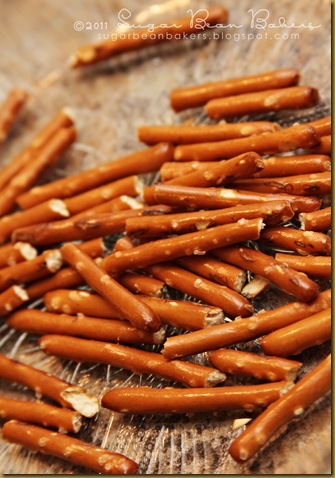 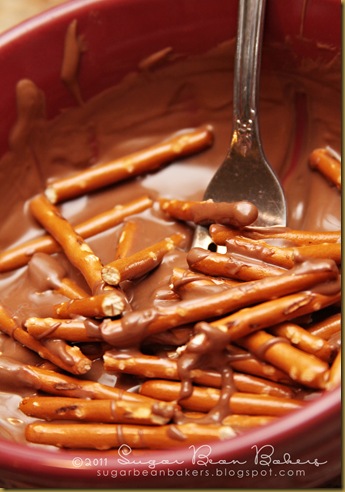 Toss into chocolate, using a fork to coat. 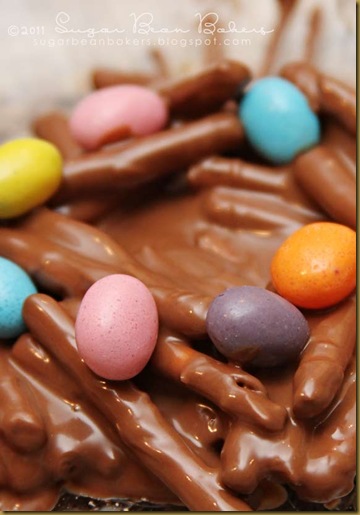 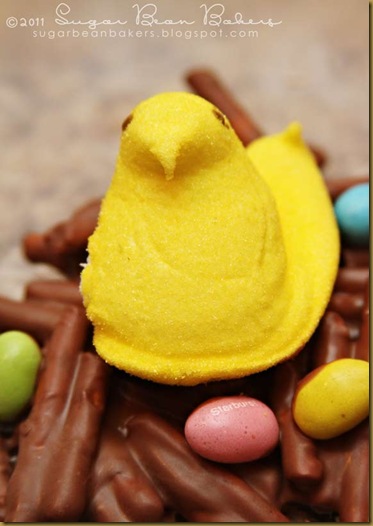 Top with a cute lil Peep.
Allow to dry and you are done-zo!
Cute, easy, and tasty. What more can you ask for.
Totally adorable with tags for place cards too. You know, have your place card and eat it too?

I hear tell of people who do not enjoy peanut butter.

Though this is a very foreign concept to me, I can only assume it is true.

Try as I can, I can not understand this. 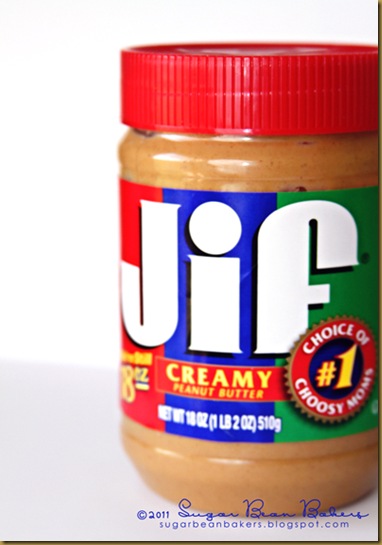 You know what goes great with peanut butter?

Leaving it’s side kick jelly out of the equation.

CHOCOLATE.
Lovely things come out of this combo.

Here, however, we are talking about chocolate cake, with peanut butter icing.

Did the clouds just part and the birds begin to sing?

You just use the basic icing recipe I posted for the Oreo Cupcakes, and add 1/2 to 3/4 creamy peanut butter to taste.

Whip the softened butter in the mixer until fluffy. Add the powdered sugar, vanilla, salt. Add milk, 1 tablespoon at a time, until you reach a nice consistency. I normally use about 4. Beat until smooth. Start by adding 1/2 cup peanut butter- add more to taste.

Ideally, you would top these cupcakes (or cake if you are so inclined) with mini Reese’s cups. 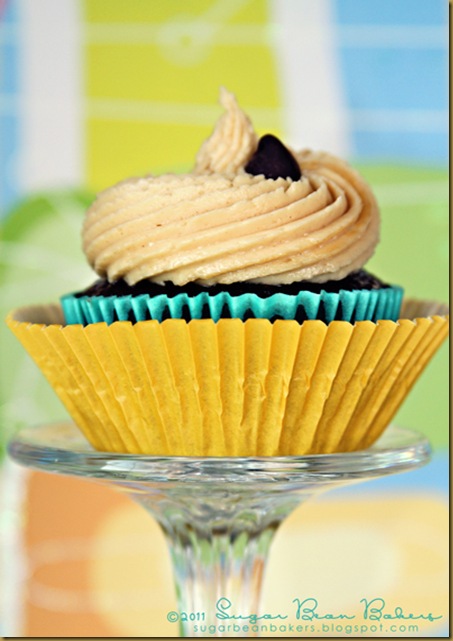 While I think this is best on Chocolate, don’t discriminate.

And for those of you who don’t love peanut butter… I’m still confused.

Luckily I have this icing to console me.

I’m sure you are relieved.

This is the same basic idea, except instead of Thin Mints, you use Oreos.

I bet you guessed that from the title of this post.

Just use your basic yellow (or white) cake.

Crush a row of Oreos and throw into the batter.

But don’t go admitting that. Be sure to lament the difficulties of this cupcake.

People will think you are Betty Freaking Crocker.

Top these with either crushed Oreos, mini Oreos, or an Oreo cut in half. If you are  brave.

That, by far, is the hardest part of this entire recipe.

While Oreos enjoy being twisted apart, they do not, I repeat DO NOT, like to be cut in half. 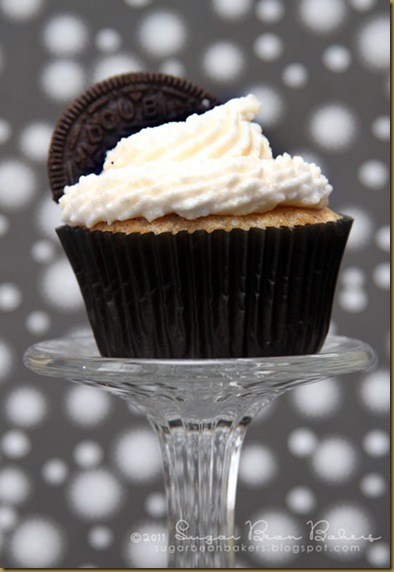 Who eats half an Oreo anyway?

No one normal, that’s for sure. 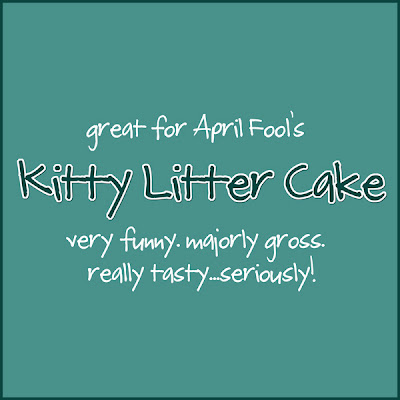 If you have a weak stomach, click the little X button in the uppermost right-hand corner and close this blog toot sweet.

However, if you are a little braver, or if you have a twisted sense of humor, this post is for you.

Me? Imma little twisted, thank you very much.

Last Friday, as you know, was April Fool’s Day.

I did a little research on this “holiday”.

On explanation is this:
April Fool's Day, sometimes known as All Fool's Day, allegedly, began in the year 1582. Pope Gregory XIII ordered a new calendar (the Gregorian calendar) which would replace the old Julian Calendar. This calendar started the year on January 1. The Gregorian calendar celebrated New Year's Day on or around April the 1st or in Medieval times, March 25, with the Feast of Annunciation and ending the week long celebration on April 1.
In the same year, France also adopted the Gregorian calendar. Many people refused the new date of Jan 1 as the beginning of the year, or simply had not heard about the new calendar. They continued to celebrate April 1st as the New Year. People who were adhering to the new calendar began to make fun of those using the old one. They would send them on "Fool's Errands" or do other forms of trickery. This practice soon spread throughout Europe.

Of course, today, we simply know it as a fun day to try and trick our family and friends.

My nieces were coming down to spend the evening, so I decided to pull a little prank on them.

click on this only if you wish. It’s realistic.

It was great fun.

There are “kitty litter cake” recipes out there, but I chose not to use squished up cake and pudding. Eww. I decided to use the basic Dirt Cake recipe, but instead of using chocolate cookies, I used Duplex and Golden Oreos. I also used Little Debbie Cosmic Brownies instead of Toostie Rolls for the kitty “treats”.

Here’s what you’ll need to trick and disgust your family and friends:

Use a food processor to chop the cookies as finely as possible. Chop the duplex and the goldens separately. Sit aside.
Mix butter, cream cheese, and sugar thoroughly with mixer.
Mix milk, pudding, and whipped topping together.
Layer in a new, clean kitty litter box. PLEASE NOTE- Kitty Litter boxes are NOT Food Grade Plastic. I recommend wrapping them in Turkey Roasting bags.
Layer- cream cheese layer, then pudding, then Duplex cookies (save a handful), finally, Golden Oreos. Sprinkle the handful of Duplex over this and blend until realistic looking.
Then comes the fun part. Break brownies into 3 pieces each, then roll into kitty "treats". Be sure to pinch the ends. Then put on top of the cake. Be sure to cover some with the cookies.
I also sprinkled a little blue sugar in the mix to make it look more like the Kitty Litter with "scent crystals".
Serve w/ a new kitty litter scoop (again, I recommend using this as decoration only, since it is not Food Grade Plastic) and gross out your people!
I sat mine on the table and when they saw it, I yelled at the Bean, “YOU LEFT THE CAT BOX ON THE TABLE???????? WHAT ARE YOU THINKING???”

And they fell for it. How? I do not know, not that it wasn’t convincing, because it SO was, but because I’m a bit of a germ-a-phobe and would NEVER NEVER NEVER have my cat box on the table..

I get the willies just thinking about it.

The Bean closed his eyes when he ate the “treat”, he said, ‘I know it’s a brownie, but… I can’t get over the way it looks!’ My oldest niece wouldn’t touch it.

I mean, look at that face. 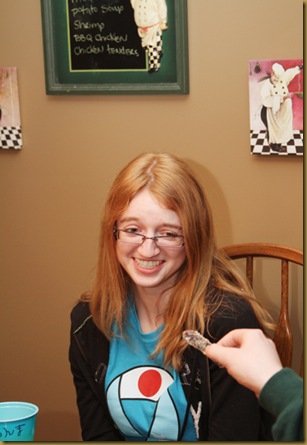 So, I pulled a pretty disgusting trick on my nieces and sister in law for April Fool's.
It was a kitty litter cake.
It looked totally real.
And totally disgusting.
I'm afraid I'll lose followers if I post it! LOL! 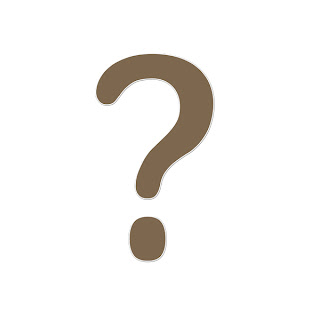