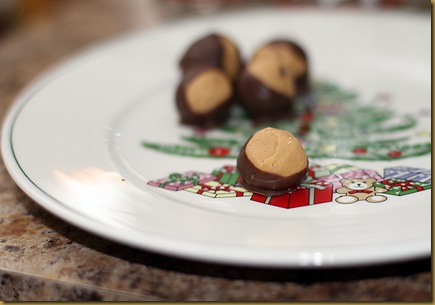 I’ve been told, that those who don’t live in Ohio (or surrounding states), do not refer to these delicious lil treats as Buckeyes. They call them… Peanut Butter Balls.

In Ohio, Buckeyes are a tradition, I mean, we ARE the Buckeye State.

You won’t believe how often during the holidays people will ask, “Where are the buckeyes?”.

And we know they don’t mean the Ohio State University Football team.

Or the poisonous nut (seed really) for which our state tree, residents, and university mascot are named.

Candy named after something poisonous? Yeah… that’s how we roll in Ohio.

So you want to make Buckeyes?

Here’s the basics. Easy. Peasy. Time consuming. Worth it.
There ya go.

Butter, peanut butter, powdered sugar, and vanilla beat together into creamy deliciousness which you roll into balls and dip into melted chocolate.

Now, I say you should leave the opening of peanut butter at the top. I’m an Ohioan. I have to say that.

You can dip it all. You’ll probably cause mass chaos, hysteria, and babies to cry.
But it’s your choice. 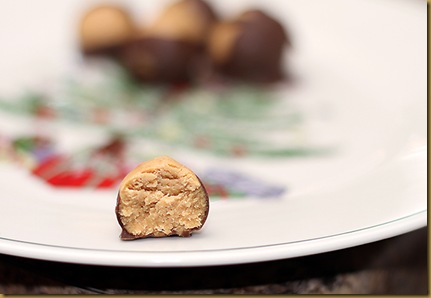 So, what's a Buckeye?

It is the perfect holiday treat, brought to you by the great state of Ohio.

Wishing you all a VERY Merry Christmas…. Tina

Cream together until fully blended.
Now… you shape into balls. You can roll them whatever size you want. Mine are about 3/4 inch. You’ll get 80 to 100 balls at this size.

Too many buckeyes you say? Inconceivable!
No worries, this recipe is very easily halved.

Then dip into melted chocolate. You can use 12 ounces chocolate + 1/4 bar paraffin, or just use dipping chocolate (also known as Almond Bark). The latter is what I always use.
To dip, you can use a toothpick inserted into the center, or like I suggested in the Oreo Truffle Recipe, use a fork, scoop them up, then tap to allow the excess chocolate to fall through the tines.

Place on wax paper to dry. 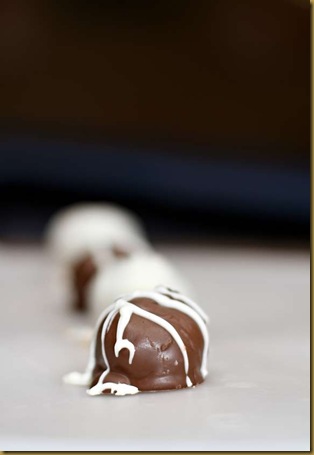 Simple recipe… 3 ingredients and a little time, yield lot of “OMGs” and “I LOVE YOUS”.

If you get proposed to… I plead the fifth.

Crush Oreos, mix in cream cheese, roll into balls, and dip in chocolate.

Tip for dipping: I find it easier just to use a fork (scoop up like you would with a spoon, then tap gently so chocolate falls through the tines), though you will have a bit more chocolate waste, and really, who wants chocolate going to waste????

I'm pretty sure that is punishable by hanging in some countries.

Anyway, there you have it. Make these and people will think you are a genius. Put them on a plate with Red Velvet cake balls and Buckeyes and you'll win the Nobel.

( By the way, these so need a better name- 'balls' is rarely a good name for anything, I think I shall dress them up to be Oreo Truffles… Yeah, yeah.. Truffles.)

You can also dip these in white chocolate bark. Or drizzle with the white chocolate. Or save a few crushed cookies to sprinkle over the tops, or add pretty sprinkles, or crushed candy canes, the possibilities are endless.

And all end with YUM.

Crush the oreos SUPER fine. In a food processor if you have one.
Mix in the cream cheese (insert manual labor here, it takes a while)

roll into balls (I use the small Pampered Chef cookie scoop for size, then roll til smooth)

then dip in melted chocolate bark (melt per package instructions).

To make mine a little smoother, I usually add about 1 tsp of solid shorting (uh...Crisco) to each 2 to 3 bricks of bark) using a toothpick.

My friend, Lori, and I bake treats for the school staff at Christmas and at the end of the year. This year we decided to do the ever popular cupcake.
Sweet little cakes… handheld treats…so many, many different varietes.. and all are yummy to eat.
I just made that up. Right here, right now.
I know you are impressed.
Now… lemme be honest. These are all from boxes.
Let’s see you make 10 dozen cupcakes from scratch.
Yeah, I thought so!
The icings are from  scratch.
And really, you know that’s all that really counts!

I’ve posted my Cream Cheese Icing before. See the recipe here.
We used it on the Carrot and Red Velvet 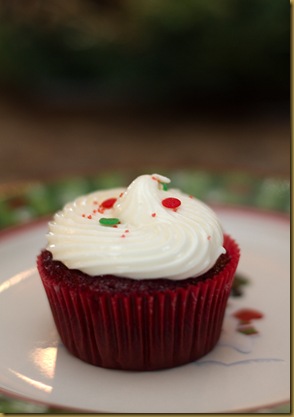 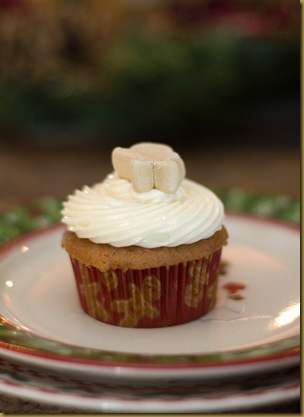 This is my buttercream:
1/2 cup shortening (crisco)
1/2 cup (1 stick) butter or margarine softened
1 teaspoon vanilla (clear if you’ve got it to keep it whiter)
4 cups powdered sugar (approximately 1 lb.)

2 tablespoons milk
Makes 3 Cups.
We used it on the French Vanilla Coconut Cupcakes 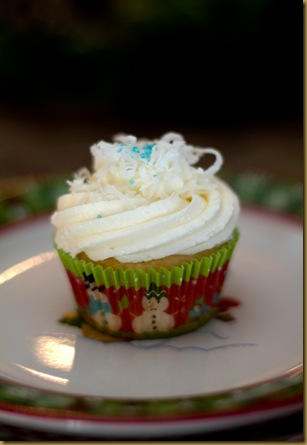 Lori actually made this icing. I think our recipes are pretty dead on alike though.
I added cocoa to it to make chocolate buttercream for the mocha cupcakes. 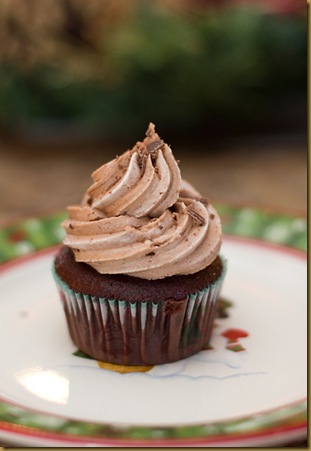 For the filling in the mocha cupcakes:
Take about 1 cup of the chocolate buttercream and add approx. 3 tablespoons of strongly brewed coffee.
You may need to add a bit more powdered sugar.
It’s not exactly a science.. just taste til nommy.
Inject into the center w/ a cake tip.
We also did what we dubbed “Hot Mess” cupcakes.
They are supposed to be Boston Cream Pie Cupcakes.
They didn’t want to cooperate.
If you ask me it’s probably because they are confused about being both pie and cupcake, but that’s a debate for the ages.
Simply whip up some vanilla pudding, inject into the center, then dip in melted CANNED (gasp!) chocolate icing. You can make your own chocolate ganache. Here's the recipe I use for cakes. But seriously... why bother?? :D 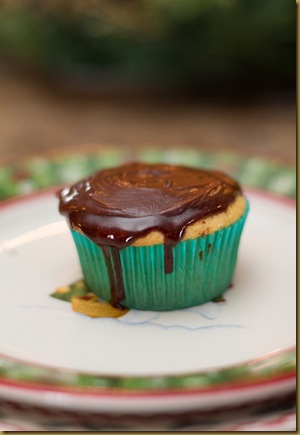 Usually they look better then this.
I know, I know, pics or it didn’t happen, eh?
We also did a dozen of German Chocolate, but I forgotta take photos.
I fail!
Anyway.. there ya go. It was cupcakepalooza for sure!
Need I mention the powdered sugar napalm that always follows me making icing??
It’s sad, but true! With a whisk and a dream… Tina (and Lori too)
Baked by Tina @ Sugar Bean Bakers at 12/15/2010 05:33:00 PM 3 comments:

{My KitchenAid was pouting}

My KitchenAid was pouting. It had been two weeks since I’d touched him.

He was very sad.
I had to bake something tonight. Or he’d cry. And he’s metal.
Tears and metal are not a good combo.
I asked the child what he wanted. Snickerdoodles.
I said no. I’m mean.
It makes a huuuuuuge batch and the man in the house won’t eat them.
And I certainly am not going to.
Not that I couldn’t.
Because I SO could.
Let’s not dwell on that though.
Light, crispy edges meet soft centers in this Peanut Butter Cookie Recipe.
However, if you like all soft, all the time, you might try this recipe instead.
I've tried it, and we all prefer the one below.
Peanut Butter Cookies
1/2 cup sugar
1/2 cup packed brown sugar
1/2 cup peanut butter
1/4 cup shortening
1/4 cup butter (1/2 stick)
1 egg
1  1/4 cups flour
3/4 teaspoon baking soda
1/2 teaspoon baking powder
1/4 teaspoon salt
1 teaspoon vanilla
Preheat oven to 375
Mix the sugars with the shortening and butter. Add in egg. When well mixed, add remaining ingredients.
You can refrigerate if you want, but I never do.
Roll into 1” balls, place 2” apart on ungreased (or parchment papered!) cookie sheet. Dip fork in a small amount of flour and make the classic criss cross pattern (the Bean, when young, was obsessed with trains, and used to call Peanut Butter Cookies “Train Track Cookies”  because the criss cross reminded him of train tracks). Sprinkle with white sugar.
Bake 8-10 minutes or until light golden brown. Cool for 5 then move to racks. 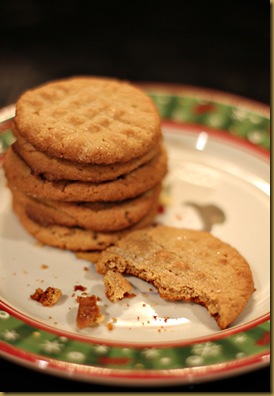