It's called a Feed

With Christmas tagging very close behind.
What are your favorite Holiday recipes? I’d love to read them, see photos of them, and maybe even try some out here on my blog!

So… what have you got in your bag of tricks?
When it comes time for Thanksgiving, I always ask my guys… what do you want special for dessert? Always the same answers- the hubs: “Peach Pie”, the Bean: “Vanilla Pudding”.
Vanilla pudding? SER-I-OUS-LY??
And he means the kind that you just add milk to!
Who raised this kid???????
Two years ago, he learned to love something new. Loved it so much, he wanted me to make it weekly.
Sugar Cream Pie.
Sans crust. 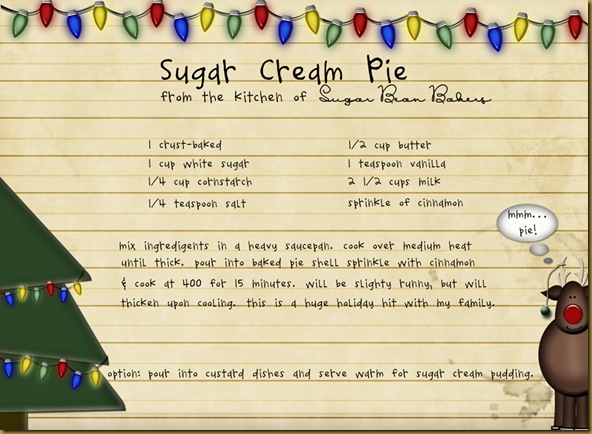 So, basically- STILL a pudding.

I don’t have a huge glamorous kitchen. It’s cozy, it’s quaint. It’s big enough for me. 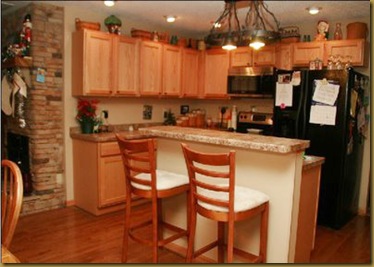 And it is still big enough for me to create a mess to make weaker people faint away at the mere sight.
But not me.
I'm strong like that. 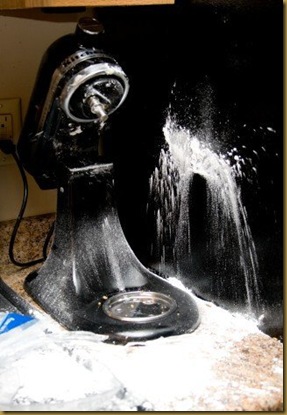 Email ThisBlogThis!Share to TwitterShare to FacebookShare to Pinterest
Labels: misc

Really, I don’t know why…

But around these parts… we don’t Trick or Treat on Halloween.
Or on the Saturday prior to Halloween.
Or on the Friday…
No, it’s the Thursday before Halloween. Every year, without fail, since I was a kid. No one knows why. It’s just a fact of life.
I’m just happy that they don’t decide Christmas Eve should be in November.
I haven’t had Trick or Treaters for years. I mean, years and years. In fact, the last Trick or Treaters I had are now mommies themselves. This makes me sound extremely old. I don’t like the way that sounds. I’m not that old. No, really, I’m not. I’m still a few years away from 40. I married young. This sounds like I’m making up a story, but it’s the truth.
Now that I’m through defending my age to the interwebs, I’ll get on to my point.
I’m the Queen of Babble. You’ll soon realize this. And I’m random.
Wait.. what was I saying?

Oh… yeah, Trick or Treat. I knew I had some cuties landing on my doorstep tonight, and, as sad as it sounds, I was excited.
We are country folk.
We don’t get out much.
Since all of the mommies who were coming knew me, it was safe to bake cookies for the treats!
I just whipped up the same recipe I posted last night and threw in some fall M&Ms, bagged, tied, and voila!
No tricks just treats! 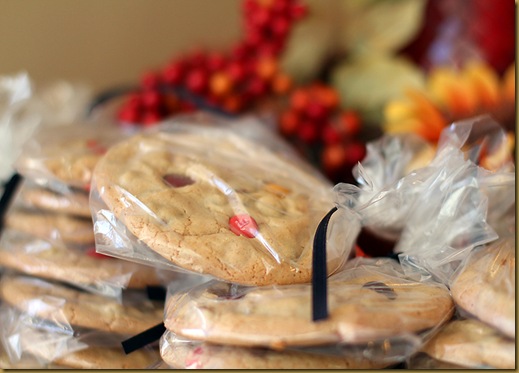 I had a cache of store bought candies in case someone who didn’t know me showed up. They never did.
I feed all of the cute critters plus the mommies (and the one daddy) that showed up.
I daresay they’ll be back next year.
On a Thursday.
With a whisk and a dream and happily treat or treated… Tina
Baked by Tina @ Sugar Bean Bakers at 10/28/2010 07:27:00 PM 2 comments:

Email ThisBlogThis!Share to TwitterShare to FacebookShare to Pinterest
Labels: Halloween

It was hard work. I’ll admit.

A terrible burden to have to do all of this research in the name of good taste. I don’t know how we made it through… but we did.

Months of painstaking, brow sweating, flour covered, time have gone into this.
It is now time to share our findings with you, sweet seekers…

It’s not these, The Original Tollhouse Recipe.

No, not these that claim to be The Best Chocolate Chip Cookie.

Not even the ones one of my fav bloggers, Bakerella.

It is in fact THESE. Which claim, and rightly so this time, to be
The Best Big, Fat, Chewy Chocolate Chip Cookie!!!!!!!! 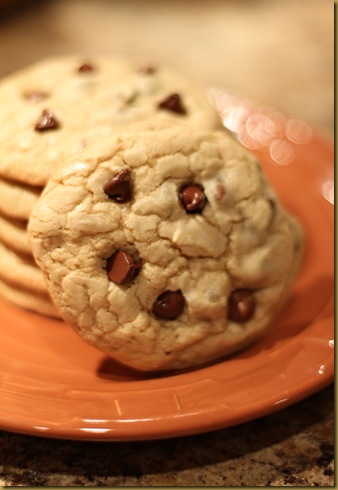 While these cookies are delicious made with margarine, I do recommend following the recipe and using the buttuh, baby. I use regular butter though, not unsalted.

Did I say nom? 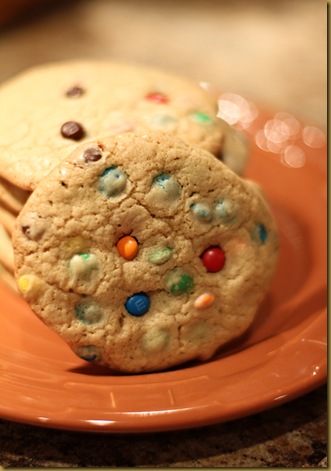 *a little tip to make your cookies extra purty is to push a few chocolate chips, M&Ms, etc randomly into the tops of the cookies when they are fresh out of the oven. Adds a lil somethin' extra :D

I have an addiction…

I’m not ashamed to admit it. I just heart their lovely, shiny, plasticness.


There. I said it. I feel better now.


Here is a peek into my pantry.

Please notice the R in last word of the former sentence. This is a PG blog after all. 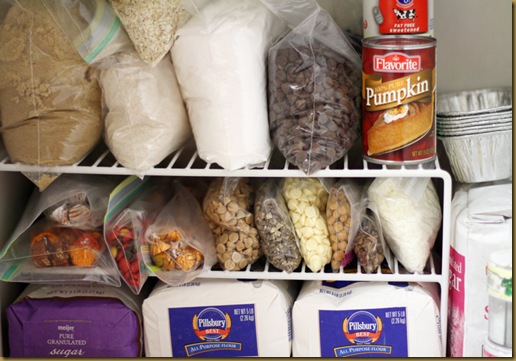 See, I’m not making this stuff up. It’s a Ziplocpalooza in there!

The only reason there is no flour or sugar in them is because they reside in canisters. I feel bad for them often… to be left out like that.


Living in the Land of Ziploc we have: Top Row-Brown Sugar, Whole Wheat Flour, Oats,  Powdered Sugar, and Chocolate Chips.


I find the ziplocs a very effective way to store my items, more so than the packing them come in even. I open brand new packages and dump into my beloved ziplocs, sqeeeeeeeeeeeze all the air out and then place in the pantry. There’s no way I could have fit all of this in there otherwise. That’s 8# of brown sugar, about 5# of Powdered sugar, and at least 7 bags of (plain) chocolate chips. Not to mention all on the shelf below.

Email ThisBlogThis!Share to TwitterShare to FacebookShare to Pinterest
Labels: organization

Super, super moist. Original recipe calls for walnuts (ew), and no vanilla. Well, see, I consider it a crime in the baking world to EVER go without vanilla. It's just not natural. I even put it in my peanut butter cookies.  I like to color outside the lines!

Meanwhile back at the whisk....

Mix together the  melted butter with the sugar and egg until fluffy(ish- mine never exactly got what I'd call fluffy. Puffy  maybe.). Add apples and (optional) walnuts and mix lightly. Add the rest of the ingredients and mix until just blended. Spread in pan and bake for 35 mins or until toothpick comes out clean.

Side bonus? Your house smells like heaven. Or how I think it should smell :D

These were possibly a little TOO moist. I think I'd add an extra 1/4c flour if you aren't going to add the walnuts. Most people will add them though. Yeah, I don't get that ;)

Original recipe was found at AllRecipes.com

With a whisk and a dream...Tina

Once you pop… you can’t stop!

I’ve long been a fan of “THE” Bakerella. She has the cutest ideas and tastiest treats!
I picked up a copy of her book, Cake Pops, from Amazon. 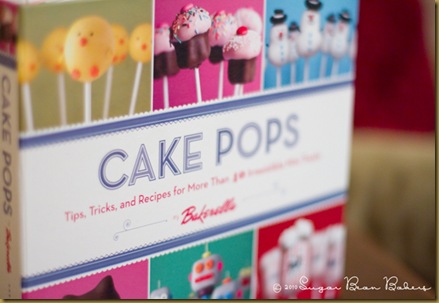 So… when a fundraising op came up for Sugar Bean’s school, I made some at his request. I’ve made her Cake Balls many times. They are always a huge hit. 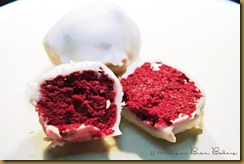 I’ve also made them to look like ice cream cones. Did I say huge hit? Because these were a HUGER hit ;) And yes, I’m aware I just said huger. 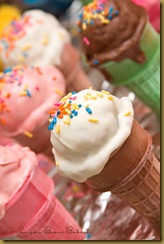 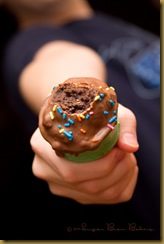 I’d never made the pops though. It was high time I tried.
This endeavor greeted me with a fail, a fail, and oh, a faiiiiiil.


Bakerella says to put your cake balls in the freezer for 15 mins, then insert a stick into melted chocolate, then dip. They kept falling off my stick! I’ve since read my cake balls were probably too moist, and needed more cake, less filling.. no, that’s not right.. more cake, less icing (same difference, really, eh?). Hubby suggested that I first insert the stick THEN freeze. This worked quite well. I hate to have him be right, but eh, it’s gotta happen sometimes, yeah?
I decided to make the Pumpkin Pop 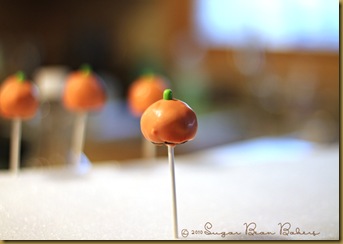 The Kitty Pop (it’s supposed to be black, but I used straight chocolate instead- I know, I’m a rebel). 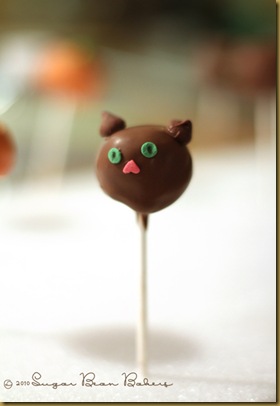 The Ghostie pop. BOO!  He scared ya, didn’t he??? Scary how good he tastes… 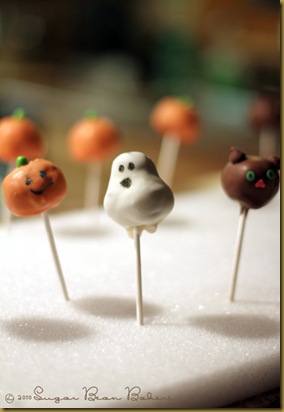 And the Mummy pop. 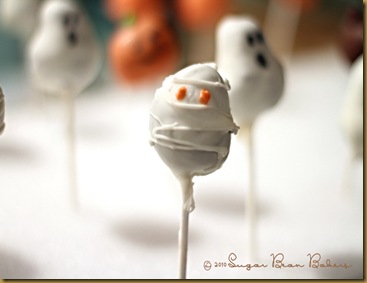 I want my mummy!!!!!!!!!!!
A word to the wise… Do NOT spend $9 on Wilton Edible Ink Makers. They don’t work (or barely work, then stop working) on candy. I scratched out a couple faces, then finished the rest with melted chocolate. I hear the Americolor markers work well, and it’s what I see in Bakerella’s photos, but I’ve not tried them myself to find out yet.
Overall, these were pretty time consuming, at times frustrating, but pretty fun… and sooooooo cute.
Here’s a kitty that fell off his stick for some reason. Sugar Bean is trying to eat him. I told the kitty to run. I wish he’d listened.  Bean is glad he didn’t. Yum! 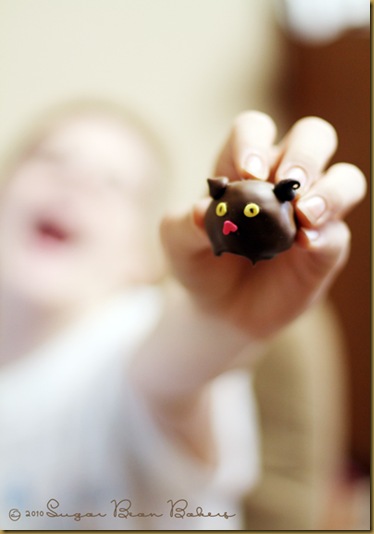 Who are the Sugar Bean Bakers?

If you live in this hemisphere, I'm sure you are well aware of that fact. If you don't... well, since we are opposites, and it's spring there, I'm sure it didn't take you too long to figure out that lil tidbit of info either!
Never the less... here's a fabulous fall treat you are sure to enjoy! 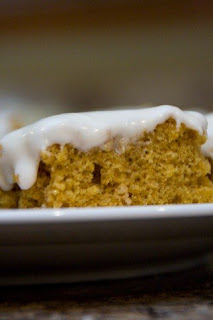 Here is the recipe for Pumpkin Bars:
this is "The Lady's" recipe (aka Paula Deen)- tho I made some minor adjustments.
Ingredients
Bars:
* 4 eggs
* 1 2/3 cups granulated sugar
* 1 cup vegetable oil
* 15-ounce can pumpkin
* 2 cups sifted all-purpose flour
* 2 teaspoons baking powder
* 2 teaspoons ground cinnamon
* 1 teaspoon salt
* 1 teaspoon baking soda
*** I added a pinch of Ginger and a pinch of Nutmeg

***I added an extra cup of Confectioner's sugar so it was more of a frosting instead of a glaze & extra 1/2 tsp Vanilla
Directions
Preheat the oven to 350 degrees F.
Using an electric mixer at medium speed, combine the eggs, sugar, oil and pumpkin until light and fluffy. Stir together the flour, baking powder, cinnamon, salt and baking soda. Add the dry ingredients to the pumpkin mixture and mix at low speed until thoroughly combined and the batter is smooth. Spread the batter into a greased 13 by 10-inch baking pan. Bake for 30 minutes. Let cool completely before frosting. Cut into bars.
*****I baked mine in a jelly roll pan- made a TON of bars! I cut them poorly- so they were all sizes, but I got 52!******* 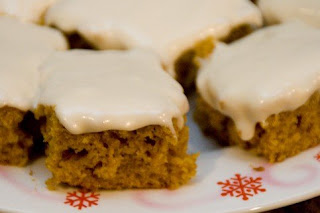 To make the icing: Combine the cream cheese and butter in a medium bowl with an electric mixer until smooth. Add the sugar and mix at low speed until combined. Stir in the vanilla and mix again. Spread on cooled pumpkin bars.
mmm...nom nom nom..
With a whisk and a dream... Tina