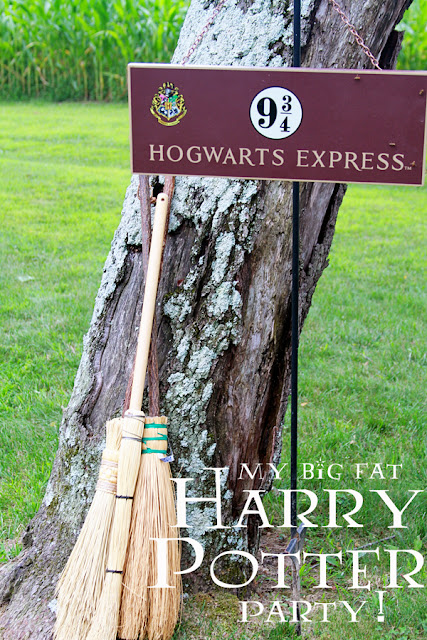 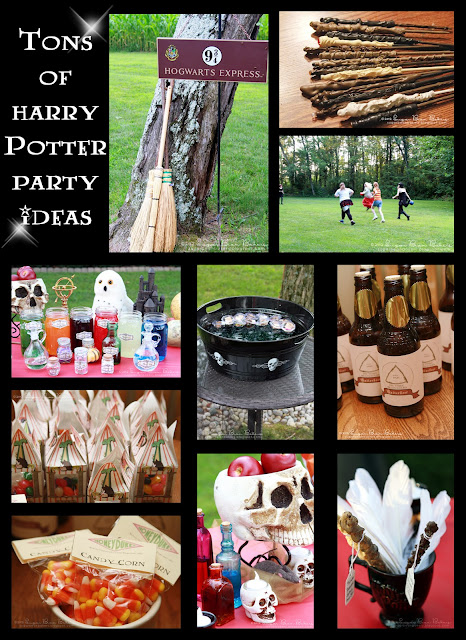 This has what has taken over my life for the last month.
Coupled with, ya know, work and real life.

I started planning this party in January. It was supposed to be held last Friday night (anyone else hear Katy Perry in their head just then? No? Just me..?), but there was a big ole stinking thunderstom that rolled through and postponed the event. I was finally able to have it last night! Weehaw!

So, here's the straight owl poo on what went down.

Are you ready for some pictures? Sorry, they don't move.

For food, I just had pizza, potato chips, & fruit, plus Cauldron Cakes

Everyone was sorted into a house. This is the house that that person belongs in, not the character they came to the party as. They simply drew names from a hat. 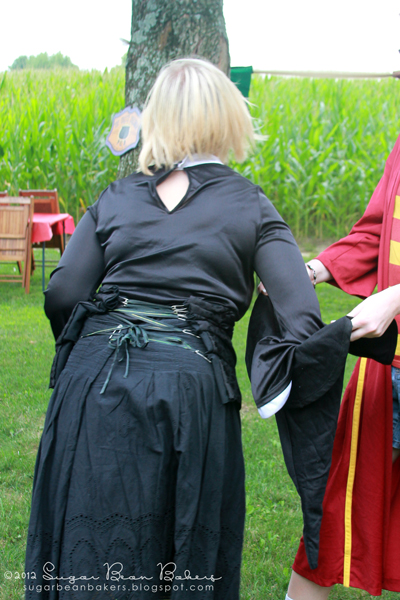 Then, it was time for the Wand Ceremony. The wands "chose" the wizard via Spin the Bottle method.

The Bean, my niece, and I all made these wands.

All of the wands came with Ollivander's tags complete with type of wood, length of wand, and core ingredient listed.

Here are a few different photos of them. They are so cool (and fun to make)! 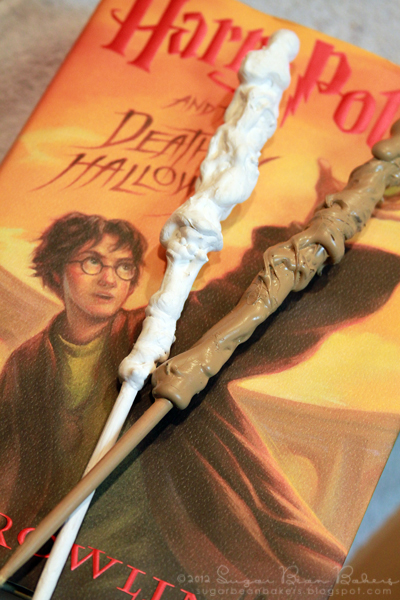 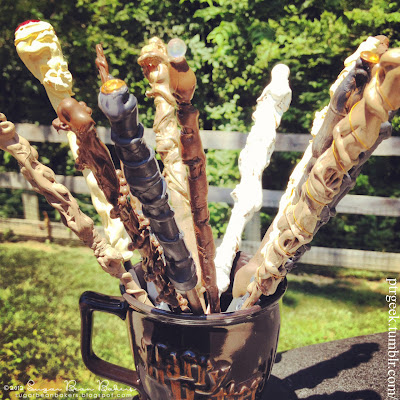 Yes, this one has someone's tumblr listed on it, no worries,
that's me! I didn't steal some poor tumblr's photo and claim it as my own ;)

After everyone had been sorted and properly wanded, it was time to become the character. Add a little 'essence of someone' to the Polyjuice Potion, and BAM! It's like magic ;) 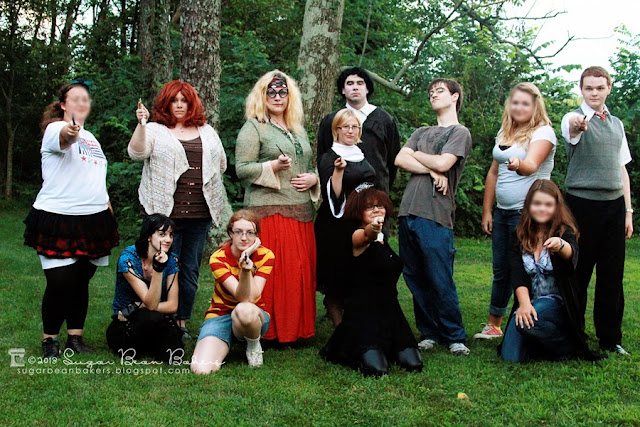 ....it was time to head off to hunt Horcruxes.

I forgot to take a photo of them last night, so here is one I took a couple weeks ago via Instagram:

After Horcrux hunting, it was time to settle down for a bit with some trivia.

No surprise here, but the ones who knew the most about Harry Potter trivia? The 3 people that came as Harry, Ron, and Hermione. Funny, eh?

Next, we traveled down to the Quidditch Pitch. 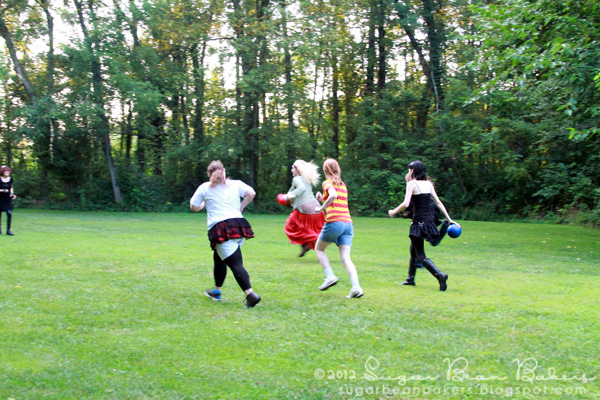 To set up the course, I used 6 Hula Hoops and 12 stakes and twine. I actually used some of my dad's tobacco sticks (we used to grow tobacco). I tied 1 hoop to 2 sticks with the twine. Then I used 3 dodge balls, 2 blue for the Bludgers and 1 red for the Quaffle. The Snitch was an actual person who went off the field and hid. The Seekers went to seek her... haha. The game was played a bit like dodge ball meets basketball meets soccer. If you had the Quaffle and were hit, you had to drop the ball and it was fair game. The point, of course, was to get it through one of the hoops at the end, while the Keeper tried to keep it out. They had a LOT of fun playing!

After Quidditch, it was time to cool down with some tasty potions. I had an assortment of colored drinks in mason jars, labeled with names: Gillywater, Pondslime, Leechjuice, Honeywater, Nettlewine, & Moondew. Then I had different colored sugars in antique looking containers with names such as: Nightshade, Lacewing Flies, Moonseed, Crushed Scarab Beetles, & Powdered Mandrake Root. I had a few other containers with liquids: Acromantula Venom (honey), Syrup of Hellebore (light corn syrup), and Phoenix Tears (um, that was just water). They mixed to their delight and then drank up! Some liked it so much they made more.

The fun was adding Pop Rocks to the drinks, they pop and sizzle in your cup! Magic!

On to the Pensieve!

I knew I wanted to do a Pensieve, but I couldn't find containers for the memories. I wanted quarter machine plastic bubble containers, but could only find them in bulk. Finally I found these cool diamond shaped plastic containers in a Wedding section. 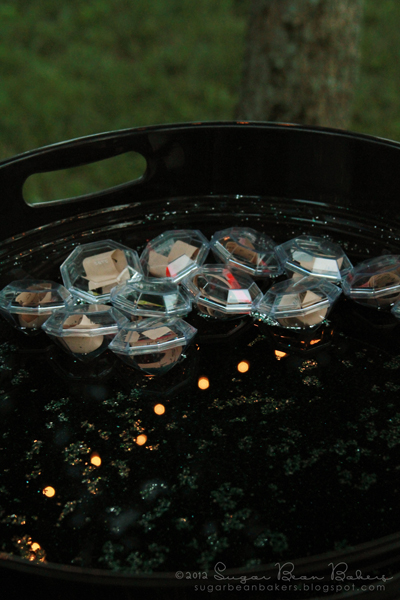 I put glitter in the water, and then floated the memories. Inside each shell was a favorite part from the book series. I also put a tiny glow stick in each one. This was a really fun part of the night. Someone would fish out a memory, read it aloud, and then we'd all discuss it. Some of the memories were: Hogsmeade Weekends, "Yer a Wizard, Harry", Ron & Hermione's kiss, Draco Malfoy 'The Incredible Bouncing Ferret', Fred & George's Hogwarts fireworks display, Snape's memories, and more. This elicited not only good discussions, but cheers, and laughter at times. 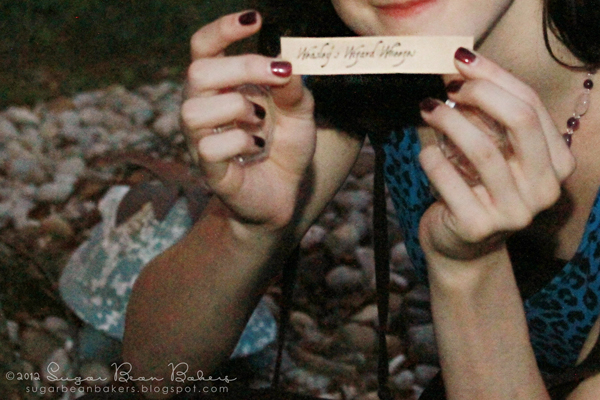 Wizard Dueling was next on the list. This was simply 2 people facing off in a posing contest. This is much funnier than it sounds. They would start together and then pace off steps (like in the Chamber of Secrets movie), then I'd count down, and they'd turn and pose in their best 'spell casting stance'. Winners were chosen via applause. The victor would then go on to face the next person and so on. One of the highlights of the night took place during this time when Harry and Ginny faced off. They never got so far as casting a spell because they started arguing about paying bills and Harry spending too much time at the pub with Ron! 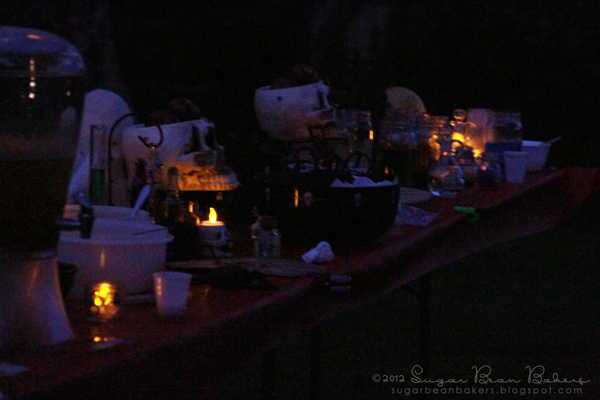 By this time it was getting pretty dark, as you can see from the above photo.
The last event of the night was shopping at Honeyduke's Sweet Shop.

They all got bags with the Honeyduke's logo & filled 'em up!

(you can find the great pre-made Honeyduke's logo that I used here on Bakingdom).

This is what they got: 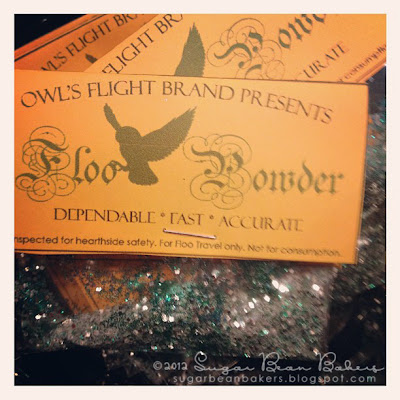 The Quills were simple enough as well, I just bought white feathers and cheap pens that you can take the ink tube out of.  Here's a tutorial.

Some of the fonts I used for my packaging logos are: Lumos, Felix Titling, Parchment, Vademecum, & Times New Roman. The owl on the Floo Powder label is from a font called Birds of a Feather.

Well, I think we've come to the end here.

I hope you've enjoyed reading about my Harry Potter party.

Man, I'm tired! I also cannot wait to do it again!

Did you want to see me? Well, please forgive my self portrait, but here I am, as Dobby, post freeing, when he wore some crazy mad get ups. 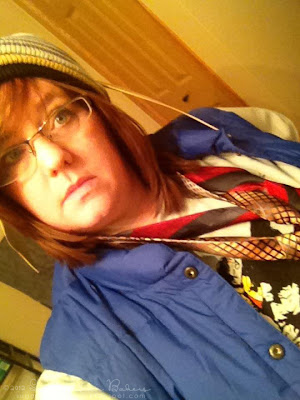