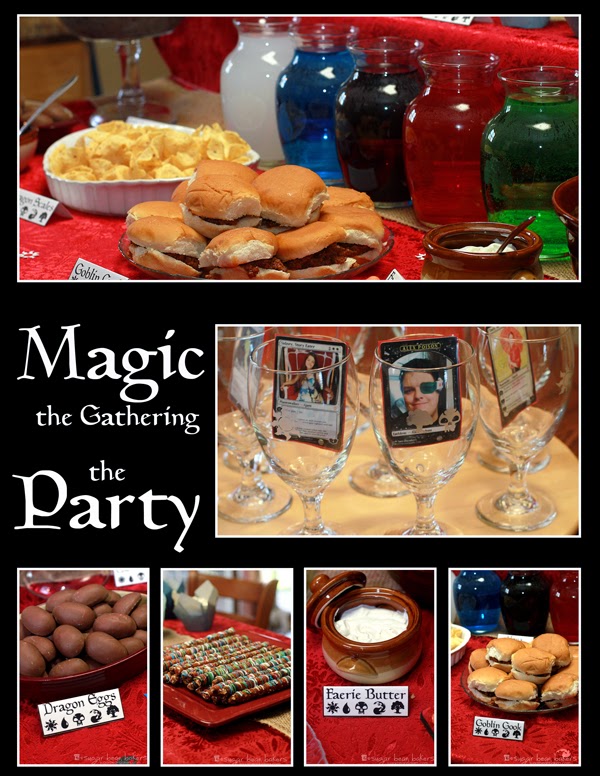 This year Bean's party was a bit of a challenge for me. I've played exactly 1 game of Magic The Gathering ever, so I didn't have a lot to go on here. I've picked up a fair bit just by him talking to me about it. Only child has no one else to tell about these things, lol. The internet has precious little ideas for a MTG party.

So, between what I've soaked in from Bean's chatter and his suggestions, I present to you, a Magic The Gathering party.

Everyone who came to the party was a player, for one thing. They all have their own decks. Each person has a favorite deck, of course. I told them to dress in the colors of their deck. Bean's favorite deck, which he named The Good Church (it's full of clerics and angels), is made up of green and white cards. 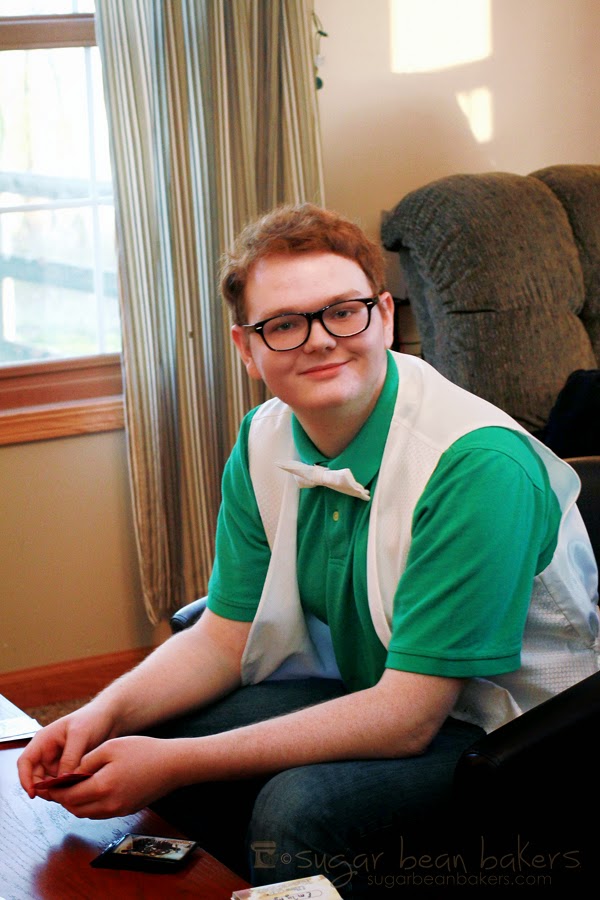 So, everyone came dressed in their deck colors.

I had the idea to make custom cards. Bean knew of a generator that did just that, so it was super easy!
You can find it at MTGCardsmith.

You can see them here, in the goblets I decorated. He designed the cards, I printed and cut them out, and he sleeved them. 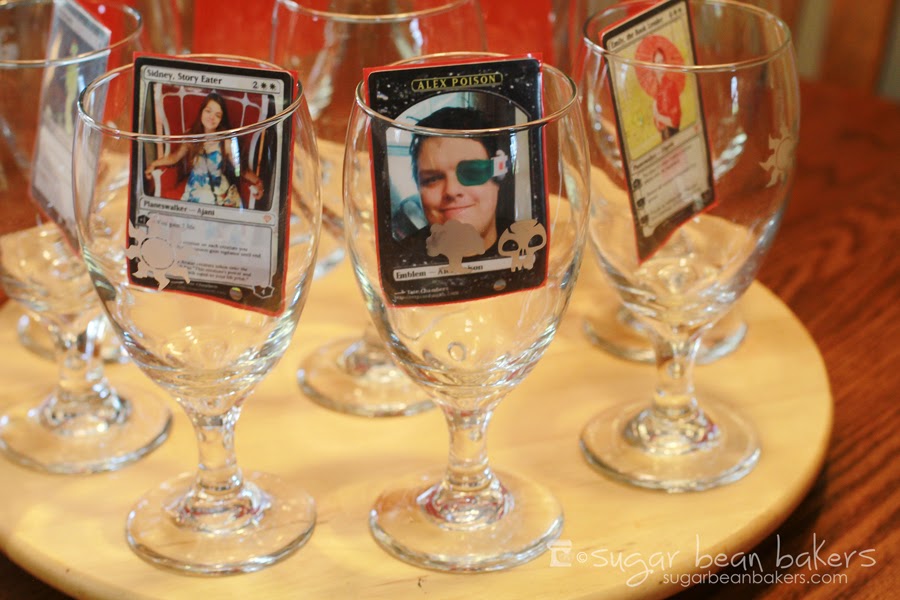 I have a Silhouette Portrait cutter, so I was able to cut the symbols with it. You will see I used it for many things for this party, but most things you could do without one. You wouldn't want to invest in one for JUST a party. For these I used goblets that I purchased in a 4 pack at Walmart for $5. I cut the logo in contact paper, then used a product called Etchall etching cream to etch the designs on the goblets. The symbols on each glass coordinated with that person's deck. Above, you can see Alex, who requested a poison counter card as his personalized card. His deck is green and black, so I etched his glass with the green and black symbols. 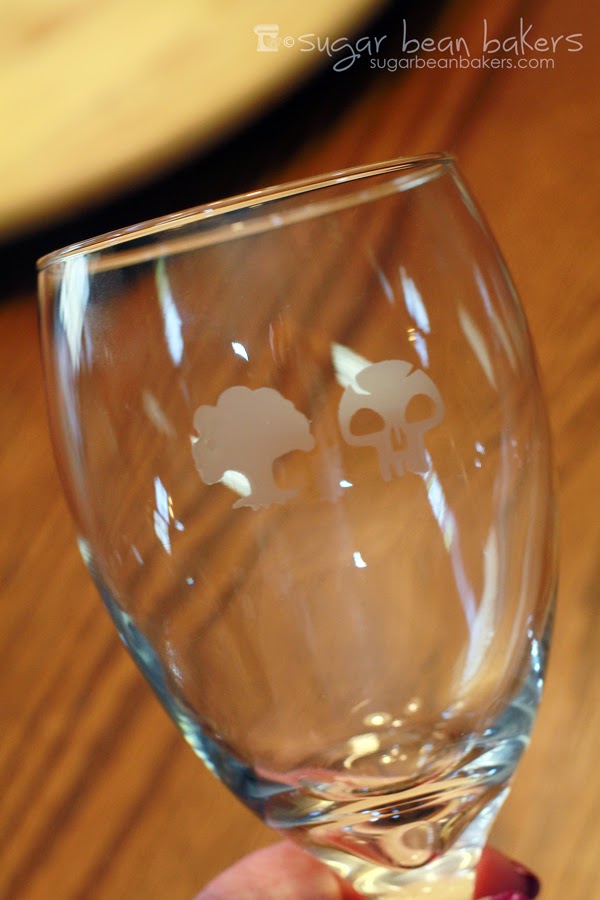 These were the glasses everyone drank from at the party. They got to take them (and their personalized cards) home as party favors.

With my Silhouette, I also cut out a pennant banner and this sign below. I covered a canvas that always hangs in my dining room with white wrapping paper, then I added the words I'd cut with my Silhouette. 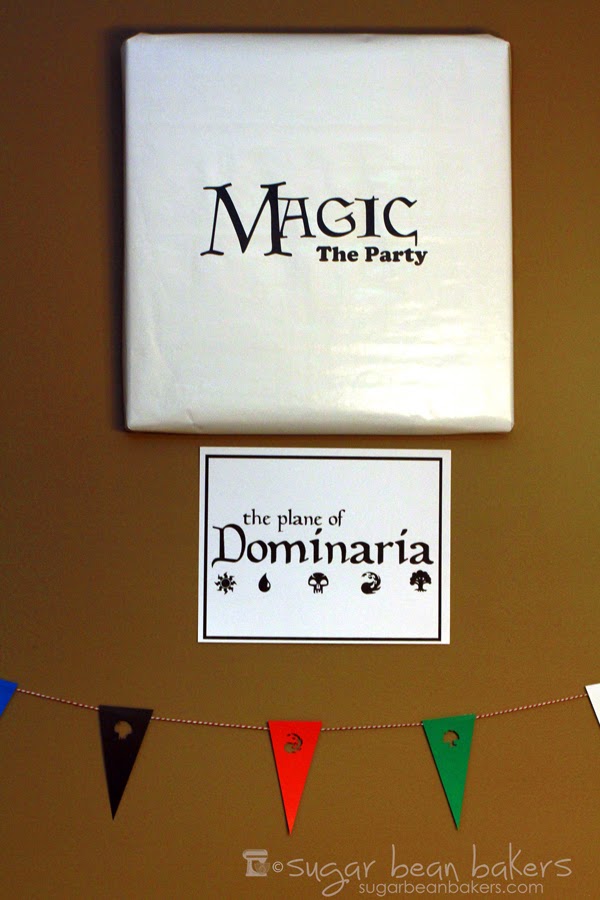 While this pennant banner obviously has the symbols cut out with my cutter, the banner would be just as nice with solid pennants. 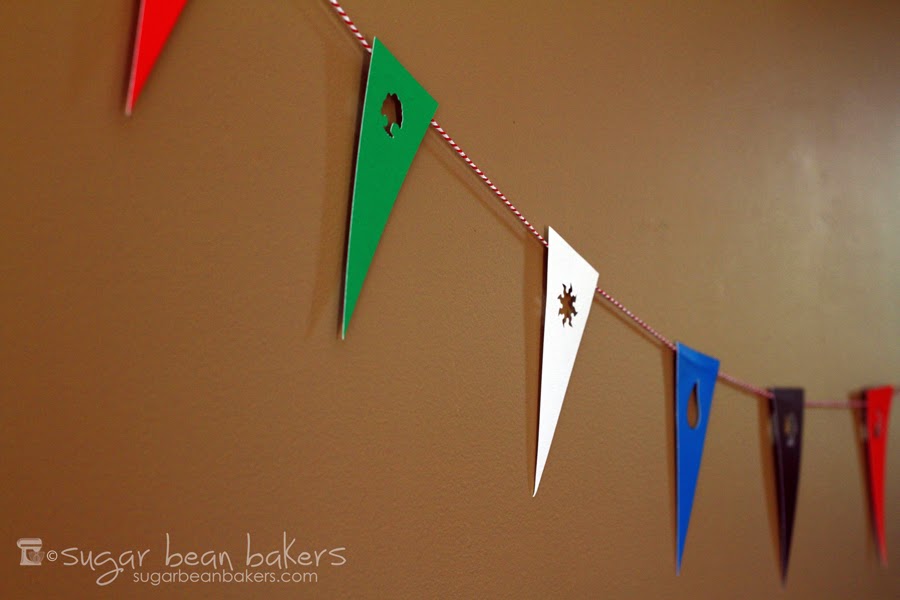 Bean named all of the rooms in Plane names, which I made signs for.

For the eats/drinks, we started, of course, with Mana. 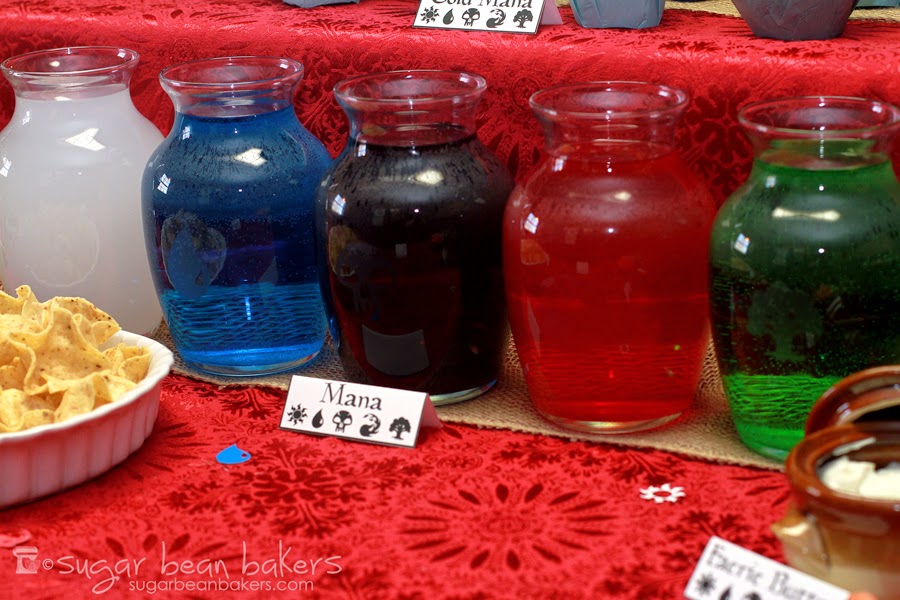 You can't tell in the photo, except for the green, but I also etched these vases with the symbols. The vases were purchased at the Dollar Tree for $1 each. They seemed to fit the theme much better than a bunch of pitchers. For the mana, I used Kool Aid. These vases fit only 1 quart at a time, so I mixed up 1/2 a pouch with 1/2 the sugar. For the colors we have: Green- Lemon Lime, Red- Cherry, Black- 1/2 Black Cherry- 1/2 Grape, Blue- Mixed Berry. The White is actually Glacier Cherry Gatorade. You could also use milk for the white.

They really isn't mention of much food in Magic The Gathering, so Bean just came up with some terms for most of it. 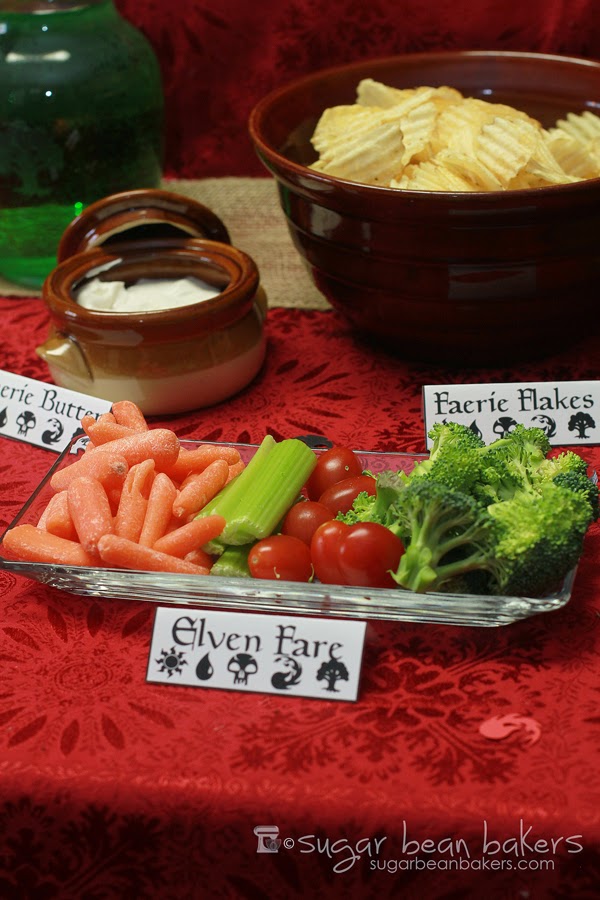 Elven Fare for the veggies, because elves, as we all know, are vegetarian. 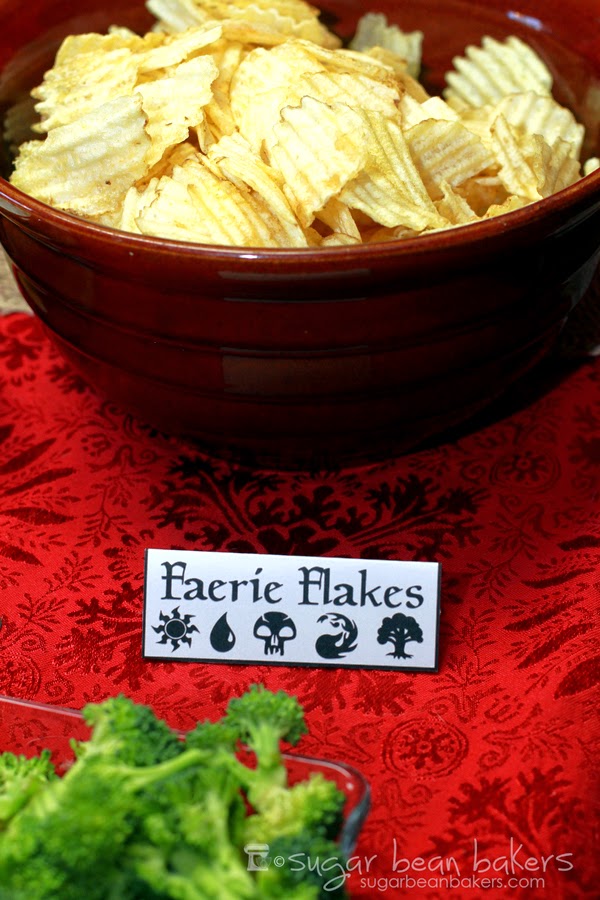 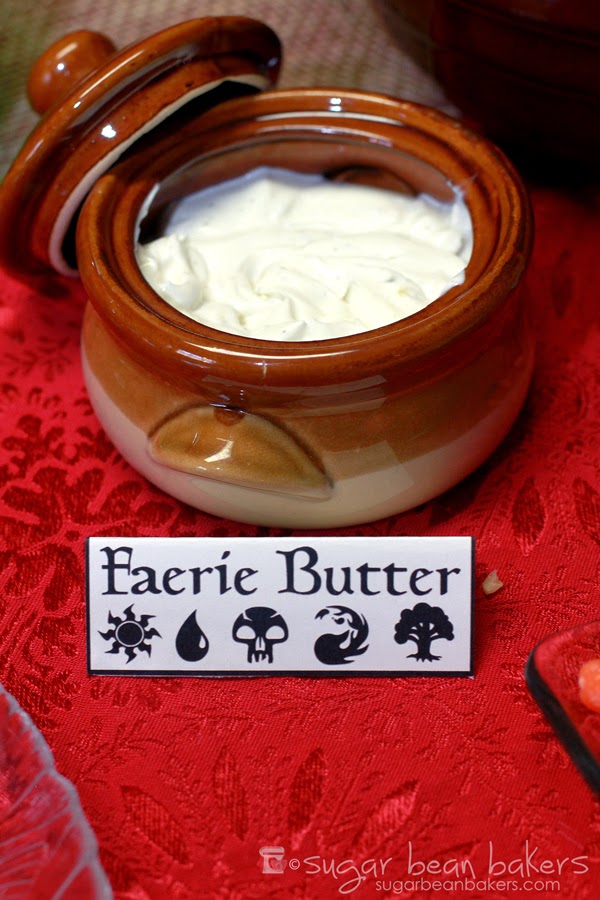 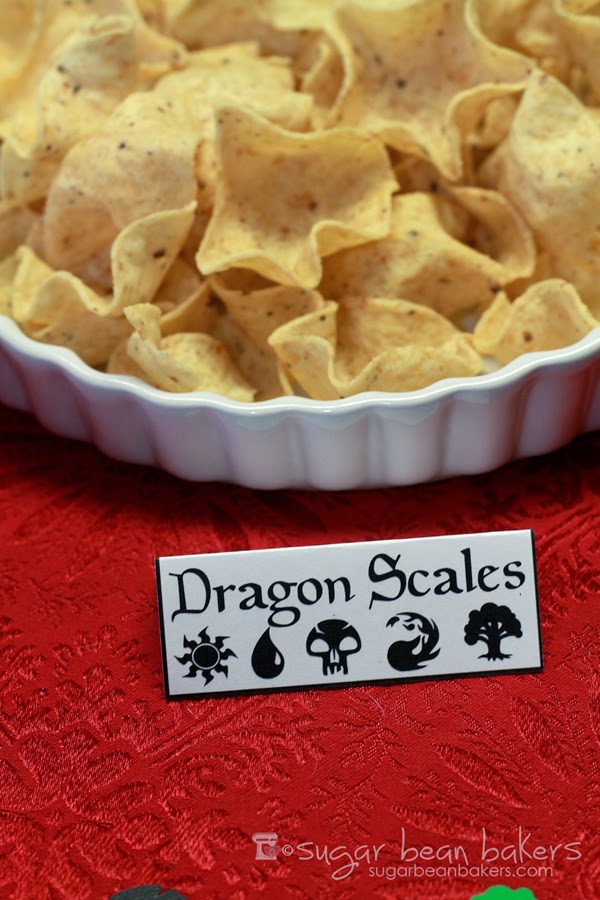 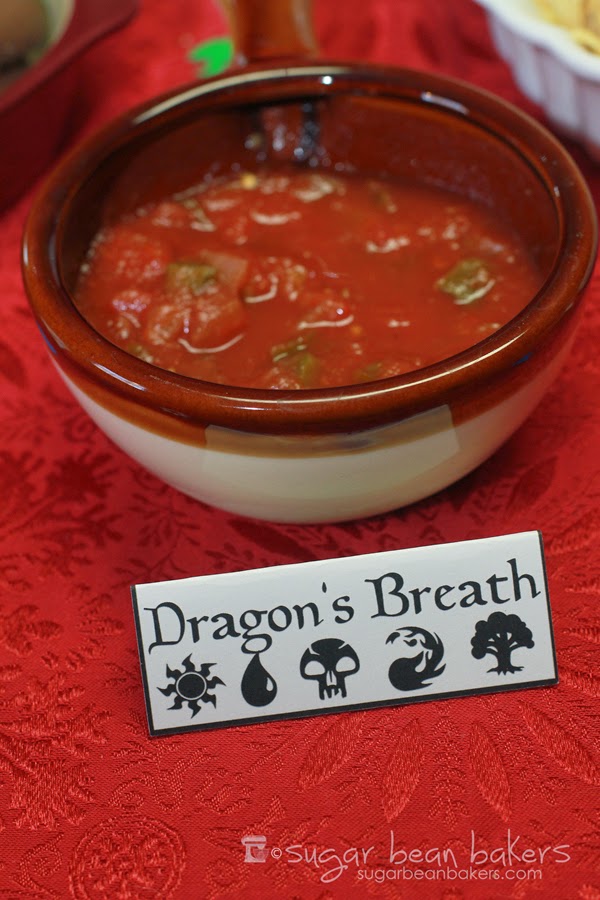 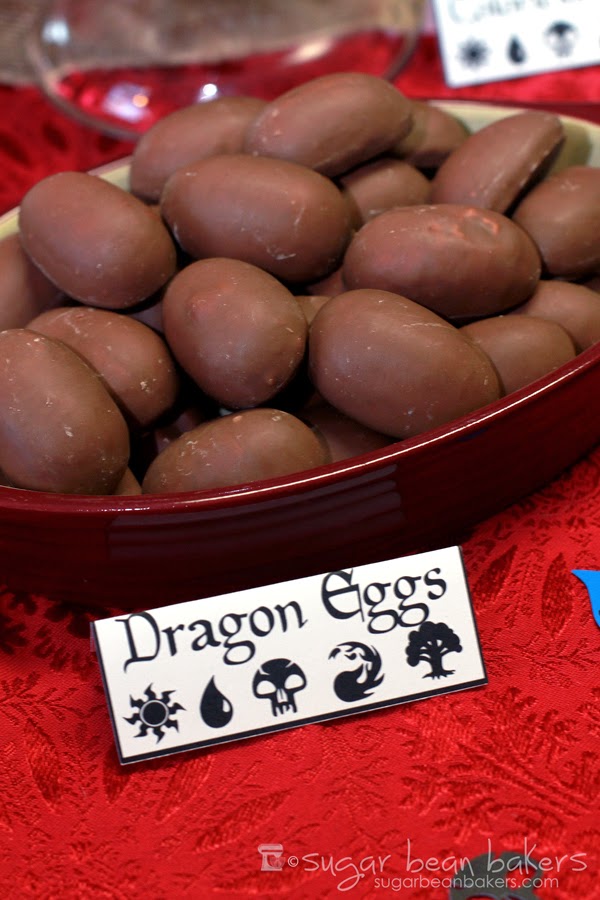 Being just a few days after Eater, I picked up these marshmallow eggs for 50 cents a dozen to be Dragon Eggs. 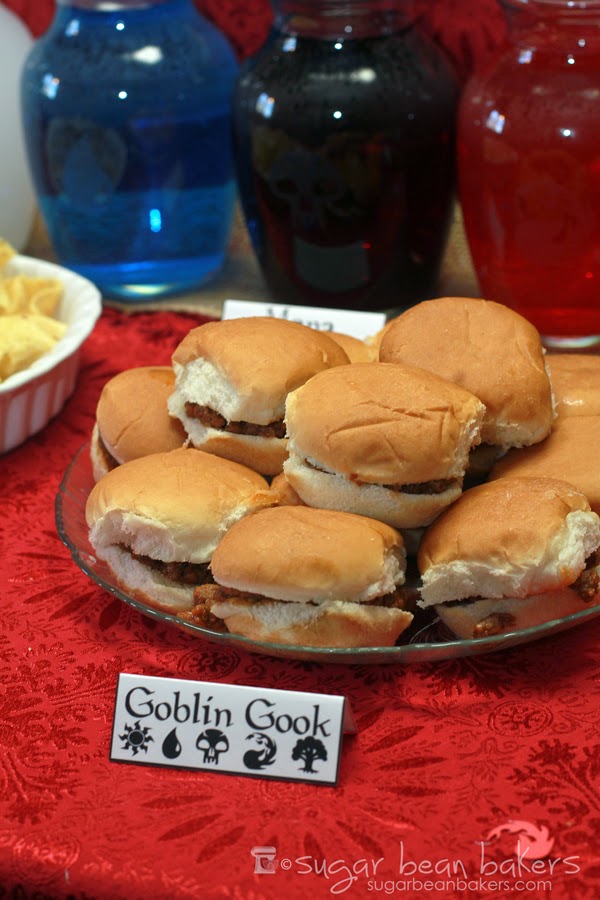 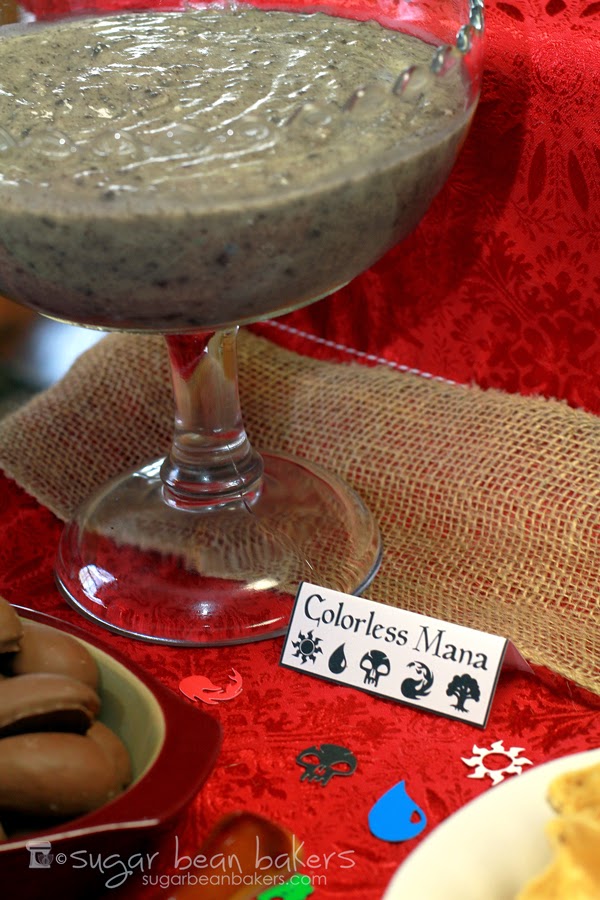 Colorless Mana in MTG is gray. Bean had the idea to use my Grey Stuff for this. Instead of making it all with heavy cream though, I used french vanilla pudding mix and crushed Oreos instead. It was a lot of fun to see the guests faces go from "EW" upon looking at it to "OOH!!" when they found out it was pudding and Oreos.

In MTG, Multicolor Mana is also known as Gold Mana. I did a display of this 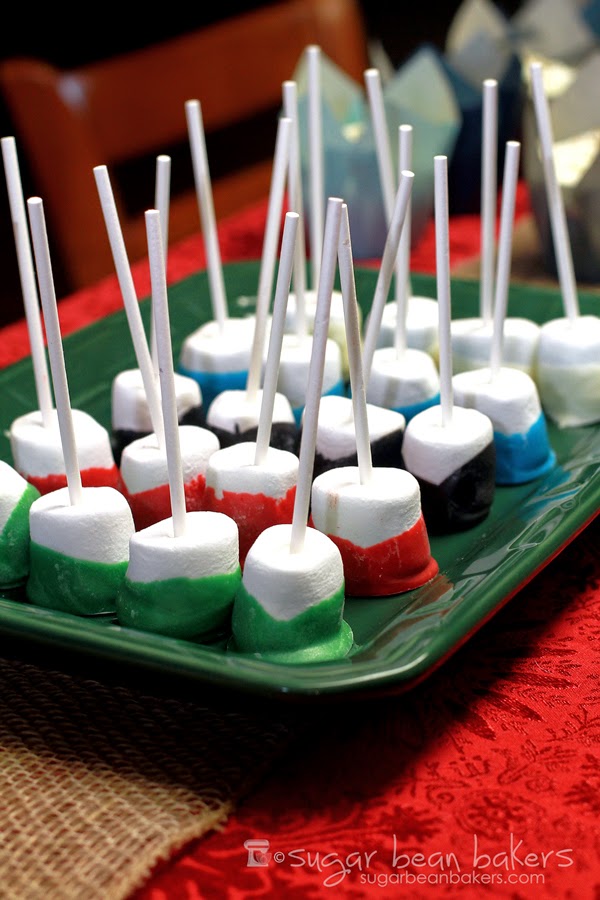 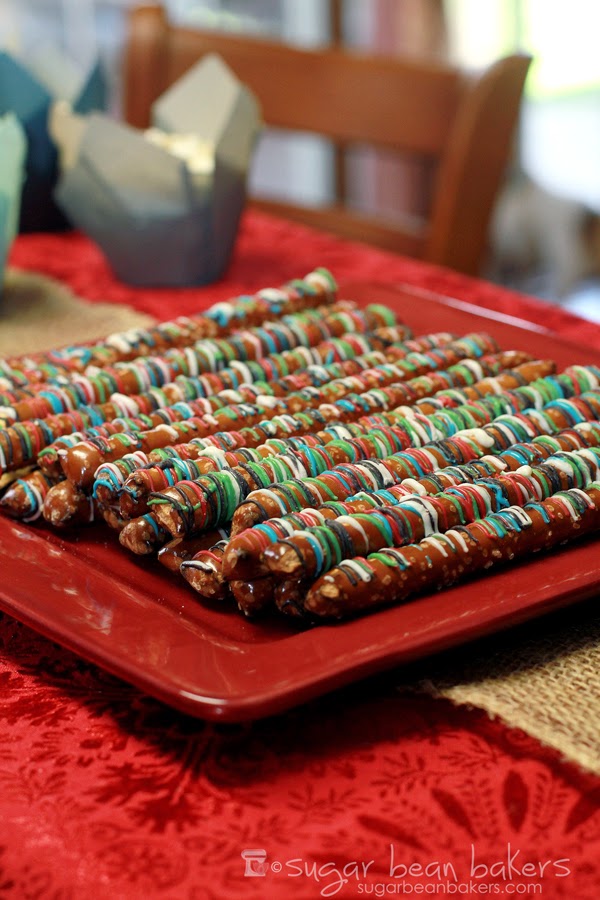 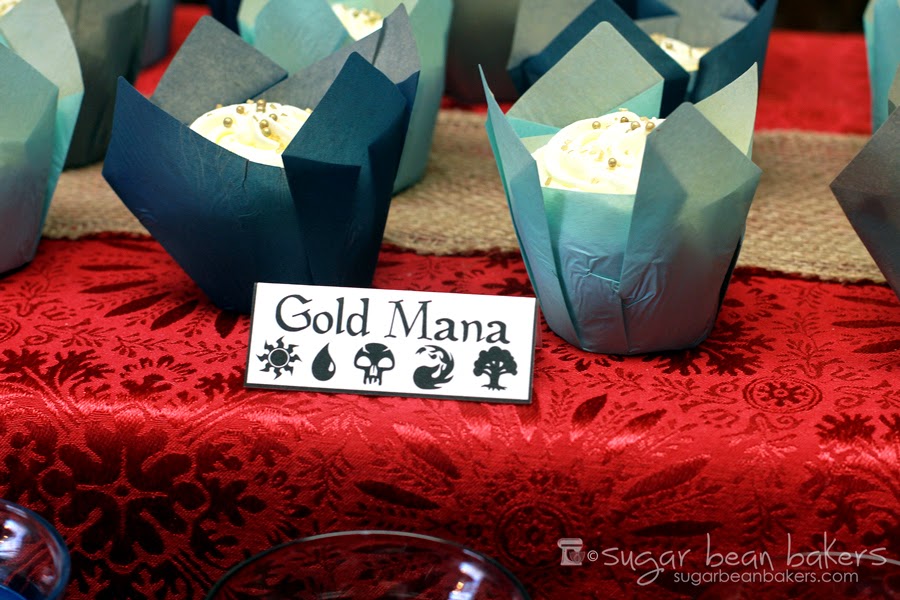 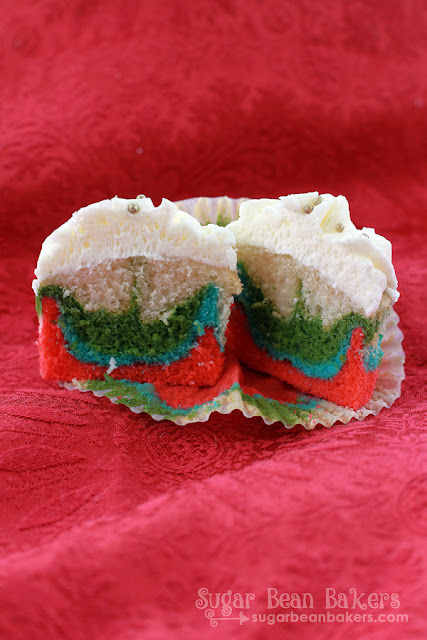 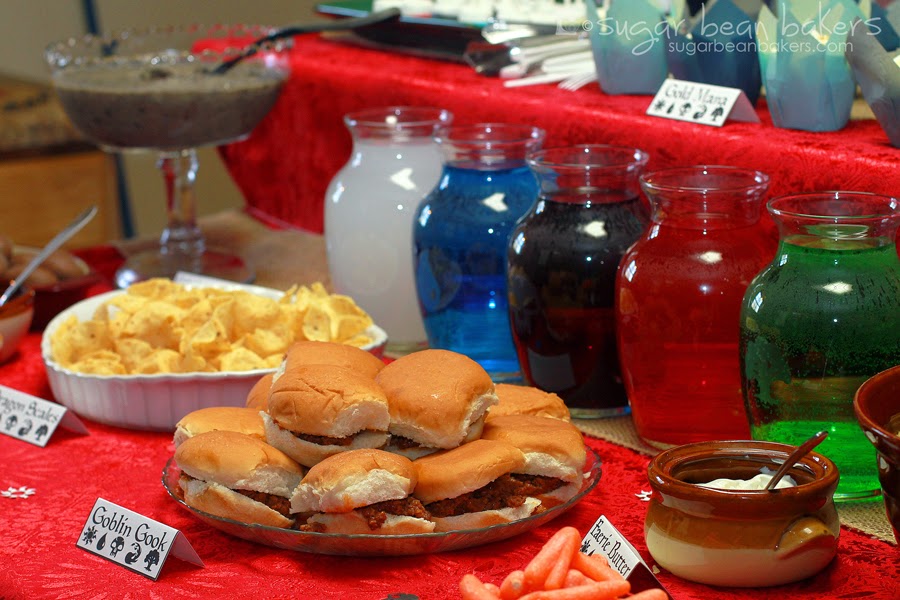 I made all the food signs in photoshop, easy peasy.

For the rest of the party, they just did a Magic The Gathering Tournament bracket. The winner won a stein I etched (again, forgot photo) that had all the MTG symbols and ARCHMAGE on it, along with some packs of cards.

It was a good night, and Bean had a great 18th birthday party!

I hope this inspires someone to throw their own Magic The Gathering party.

What party ideas would you like to see? Let me know in comments.